Looking for beautiful RV Travel places this Fall? Here’s a great one in North Carolina!

Linn Cove Viaduct is a 1,243-foot (379 m) concrete segmental bridge which snakes around the slopes of Grandfather Mountain in North Carolina. It was completed in 1987 at a cost of $10 million and was the last section of the Blue Ridge Parkway to be finished. 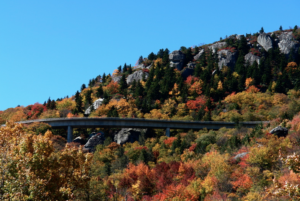 The viaduct was needed because of the damage that a traditional cut-and-fill road would have caused to Grandfather Mountain. The viaduct was designed by Figg and Muller Engineers, Inc. Construction began in 1979. It is 1,243 feet (379 m) long and consists of 153 segments weighing 50 tons each. The bridge’s segments were precast at an indoor facility at the south side of the parkway. After being transported to the bridge site, each section was lowered into place by a custom crane placed on either edge of the existing structure. The only work done at ground level was drilling for the seven footings which support the viaduct. In particular, there was no access road other than the Blue Ridge Parkway itself. The bridge has received eleven design awards.

The National Park Service maintains a visitor center and bridge museum at the south end of the viaduct. The Tanawha Trail passes by the Linn Cove Visitor Center, and it travels beside and underneath the viaduct, on its route from Beacon Heights to Julian Price Memorial Park.

Description OktoberFEST 2019 – COLUMBIA, SC OktoberFEST is a fall festival coming to the Columbiana Centre Mall this Autumn. Top vendors will be onsite featuring products, innovations, crafts and more. This year’s festival will also feature the “Trick or Treat Safely” campaign so bring the whole family and wear a costume! Hungry? Check out some […]

NOVEMBER 2, 2019 ABOUT THE SOUTH CAROLINA PECAN FESTIVAL The SC Pecan Festival is hosted by the Florence Downtown Development Corporation and The City of Florence. The festival is on THE  FIRST SATURDAY OF NOVEMBER EACH YEAR in Downtown Florence.  Mark your calendars for a great event and visit our webpage frequently for updated information as our volunteers […]